As I tell this tale of super bad gameplay, horror and near heart attacks. It all begun as all great tales (not really) begin. When Bill challenged me to play Metal Gear Solid 2.

There we are, once more, with Solid Snek doing snek-ey and sneaky things in a Tanker. Already a few things were a bit harder than I remember, as the AI would still pursue you even after you left the area and they would follow blood trails if you don't sit to tend to them. So far so good. Interesting new mechanics: check. Harder Stealth: Check

Boss fight was amazing, interesting mechanics, field of view, use of grenades and light, was a 10 out of 10 thing. What I would expect from Metal Gear Solid with better hardware to do those things.

We had a few laughs, I failed a few times, but overall, with some National Geographic worthy pictures of Metal Gear, I was doing a-ok 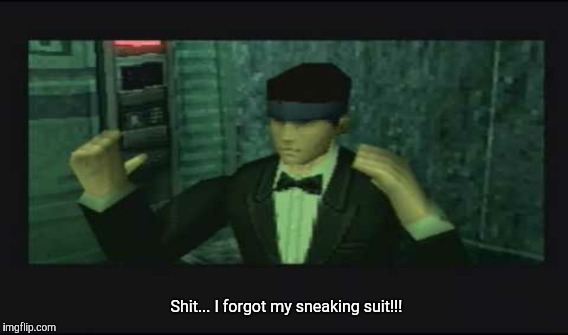 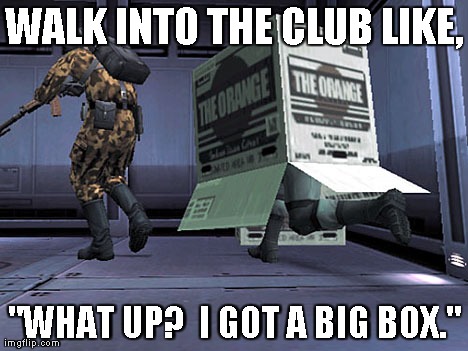 But In Reality No I Wasn't

Then we get Raiden, the 15 year old rookie from Wiskonsin and his annoying as FUCK girlfriend Rose, who are baby sited by the Colonel in a mission to save the PRESIDENT OF THE UNITED STATES.

100%Original story concept aside, the game begins and immediately grips you by the balls in terms of storytelling. The first few sectors I breezed through, until I met with totally not Solid Snake for -real-, Iroquois Pliskin (Best Fake Name). Then, everything turned into shit.

For starters, I am used to having a radar. And the game was like "HA! No" until you unlock the things in every fucking sector. Problem was that the AI was fucking outsmarting me left and right. I got spotted by a dude? Instead of him running my way, he would call for backup, and I would be surrounded.
I would knock out people in an entire map via tranquilizer in the eyeball? Just as I was prancing around the level doing somersaults and aggressive dance-fight moves, I would hear "Why is taking so long for the minute report? We lost contact with Sector Footloose", and I would again, be surrounded and shot at.

THEN I THOUGHT I WOULD HIDE IN THE VENTS! Until NO, they would fucking lob grenades in, because FUCK YOU RAIDEN YOU 15 YEAR OLD IDIOT

At this point I was still reeling in shock, as I was being pummeled by a Retro game that required more tactical forethought and actual field agent approach to counter what is still the BEST AI I have ever encountered in a game, ever. Raiden must have been dying so many times, the powers of the afterlife were not even bothering anymore as he would appear and re-appear in the underworld.

Bill on the other side of the stream was having mini heart attacks, as he was screaming through the chat for things that were obvious to him, a veteran that has played the game a million times, and I was missing left and right.

Meanwhile I was also having mini heart attacks, because between trying to avoid guards (who by the way, swarming them also does not work), not dying and getting the precious sweet Radar, I also had a fucking TIMER to defuse BOMBS. Because yeah Kojima, you fucking sadist, that is exactly what I want in that piece of shit game, MORE THINGS TO STRESS ME OUT!

Eventually I made my way into the first boss of the game, who was SURPRISINGLY super easy, when compared with the difficulty of the standard guard AI (I know right?!) but off course had to have pull a dick move and make things even more complicated. I decided to go cry in a corner after finishing that part of the game, because the AI had defeated me, and I felt like a morron too much already. 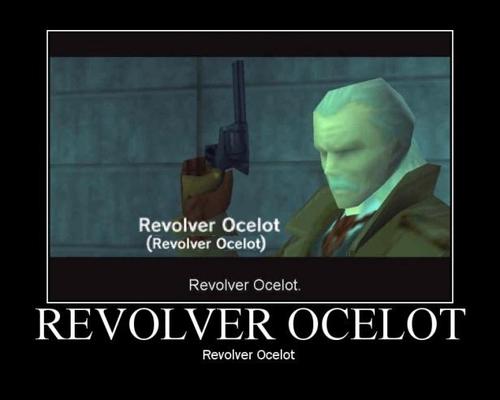 It truly is surprising to say the least that the AI in this game is fucking on the spot. I heard that they got a military adviser to make sure their AI was properly made, but never thought they actually listened to him. Everything felt natural and fluid. Enemies would clear rooms, go in together in pairs, check in lockers and under boxes should they find them. No screw up goes without you losing something. Even the stupid broken box, that is op, will still get you to lose health when they shoot it to make sure you are not inside.

Granted, despite you screaming and blood splatters on the wall, they will not do anything else to the box, but at this point, I just wanna play the game, and it already defeats me on every level.