Holy Jesus guys, this game is actually an oldie nowadays. Dragon Age Origins is a 3D RPG developed by Bioware after EA took it under its wing. Boasting its mechanic of gory combat and cool looking fatality cinematics, the game was a box office success and a beloved game by most RPG fans out there. Starring as one of the Grey Wardens, an order dedicated to fighting the constant threat of the "darkspawn" a semi-sentient pestilence like creature that threatens the entirety of the fantasy realm of Thedas. Your job is to find and kill the "Archdemon" a dragon corrupted by the "Darkspawn" who is now leading them from their lairs underground to the surface. Dragon Age Origins featured an extensive campaign, interesting universe and unique races, does it hold up to the hype? Or is it one of those games that should be forgotten with time.

The game, looked pretty decent. Despite some weird animations, and the occasional odd/ugly face texture, the game overall looks pretty good. The animations are great (spare the weird "shit in pants" combat run). The skyboxes are fantastic, the levels are varied and well designed and to top it all off it featured some pretty interesting and unique enemy designs. The fact that it still holds up as a pretty good looking game, even for today's standards is a great testament to the work done here 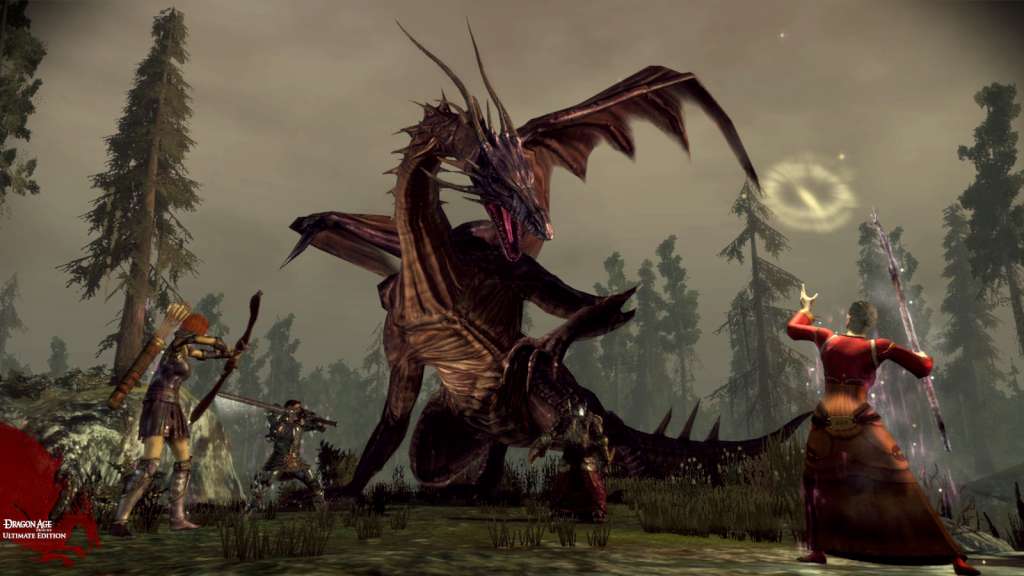 Well, regardless of whether or not you enjoy the music of Dragon Age origins, or any music by Inon Zur (not a fan myself), you cannot deny that everything in this game was great. The music, the voice acting, the sound effect, it was really that first step Bioware took to release epic sagas worthy of the movie screen as much as they were worthy of our time as games.

Music wise Inon Zur has managed to create some very thematic and intense tracks for the soundtrack, and the vocalizing is amazing at parts. That said however, I feel that it falls flat and found myself muting the music more often than not.

The gameplay is pretty standard for an RPG. It hides the turn based mechanics behind smooth animations and rather slow attack/casting speeds, making battle feel fluid and responsive. With three classes, (fighter, mage, rogue....sounds familiar), each having four advanced class paths to unlock and pick from, you basically can customize your Grey Warden as you see fit.

In addition the game offers an in depth companion relationship mechanic, allowing you to recruit, know and bond with your companions, even romance some of them if you fancy.

Finally, another great thing about the gameplay is the way certain choices may not only impact this game (and impact them greatly) but also subsequent games. Though the choices may not necessarily be great, having your actions carry on and have small tidbits and references in the other games (Dragon Age 2 and Dragon Age Inquisition) is fascinating.

Not much to say about this game. Dragon Age:Origins is a great game, with an interesting expansion that offers the player a uniquely immersive experience, a solid story and a series of memorable, fun and intense hours. Any lover of role playing games would do well to play this oldie but goldie.

If I had to say one bad thing however, is that this game is where EA's cracks started to show her unending greed. Despite having a reasonable number of well priced and worthwhile DLC, it was there that most of us started to see the dark clouds gathering on the horizon.

Aside from that though? Great game, 10/10 would immerse myself again.