The sun slowly rose from the treeline at the land of Arena. As the birds started to chirp the villagers went on to their business. They would have to build houses, farms and lumber mills. It was around that time that the scout of Ser John of the Right Leg went on to find the precise whereabouts of his allies. Bill the Vertically Challenge, Maria The New and Theodore The Grumpy, lord of the isolated lands.

"So uhm, why are my people standing idle" said Maria, via the mystical means of which the immortal god kings conversed.

"Because you have to give them orders" Replied Bill, as he too begun issuing orders.

The ensuing days passed without any trouble. The god kings were conversing among themselves, and so far the only sign of the enemy hordes was with the few scouts they would have sent back and forth.

"Uhm, Theodore, there is no gate, we can't send our trade carts your way" said ser John

"I know. I do not want your inferior items. I will stay in here -forever-" said Theodore, half joking.

"Guys why are my slaves not working?" Asked queen Maria, not making it clear if she was joking or not

"I do not want to alarm anybody but I am under heavy attack" said lord Bill, suspiciously non nonchalantly

Tensions were growing. Lord Bill was already engaged in several small skirmishes, Lord Theodore was still locked in his castle, only begrudgingly allowing a few trade carts go go back and forth with news of his kingdom. Lady Maria was currently searching for her missing sheep, and lord John was in the middle, sweating nervously as despite his economy, now a powerhouse, his military and research was lacking. He had to move swiftly if he was to be able to assist in the war effort.

But as it is with everything, time waits for no man. Slowly but surely the map started to fill with color. Hostile color. The hordes were advancing. Bill had the strongest military, despite being a few ages back, as most of his supplies had to into the war, and so his line hold. But with the hordes being more advanced, his line started to falter.

At this point, Theodore showed his true colors. Despite his initial comments hinting at betrayal, his armies moved swiftly and slammed into the back of the advancing enemy. To reinforce him, John had sent twenty of his lightest of cavalry, in order to kill any monks or siege they might have. However, the hordes had secured the relics, and they were now invoking the divine powers that would win the war.

The valiant alliance of kings and queen, would have none of it. In a daring suicide misison the light horsemen of lord John destroyed the temple, while priests took a few of the relics back, to ensure the monopoly is never again achieved. With Lord Bill's infantry and the Cavalrymen, the priests made it, but Alas, all of the soldiers were put to the sword by the barbarous hordes.

Lady Maria was frustrated with her farms, as her villagers seemed to be slacking off. 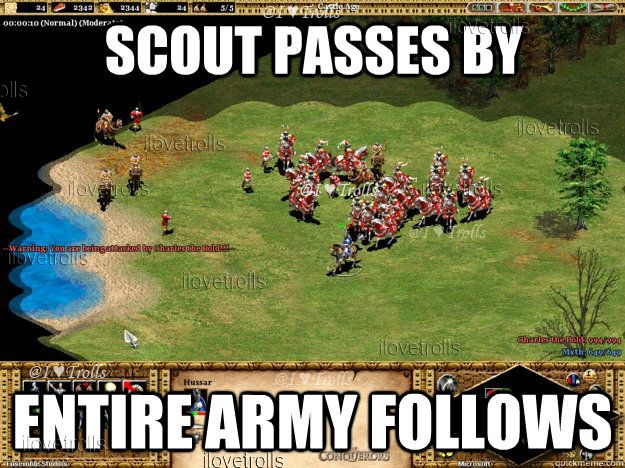 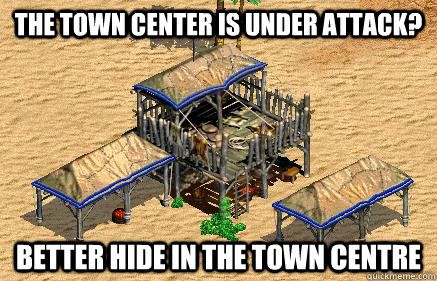 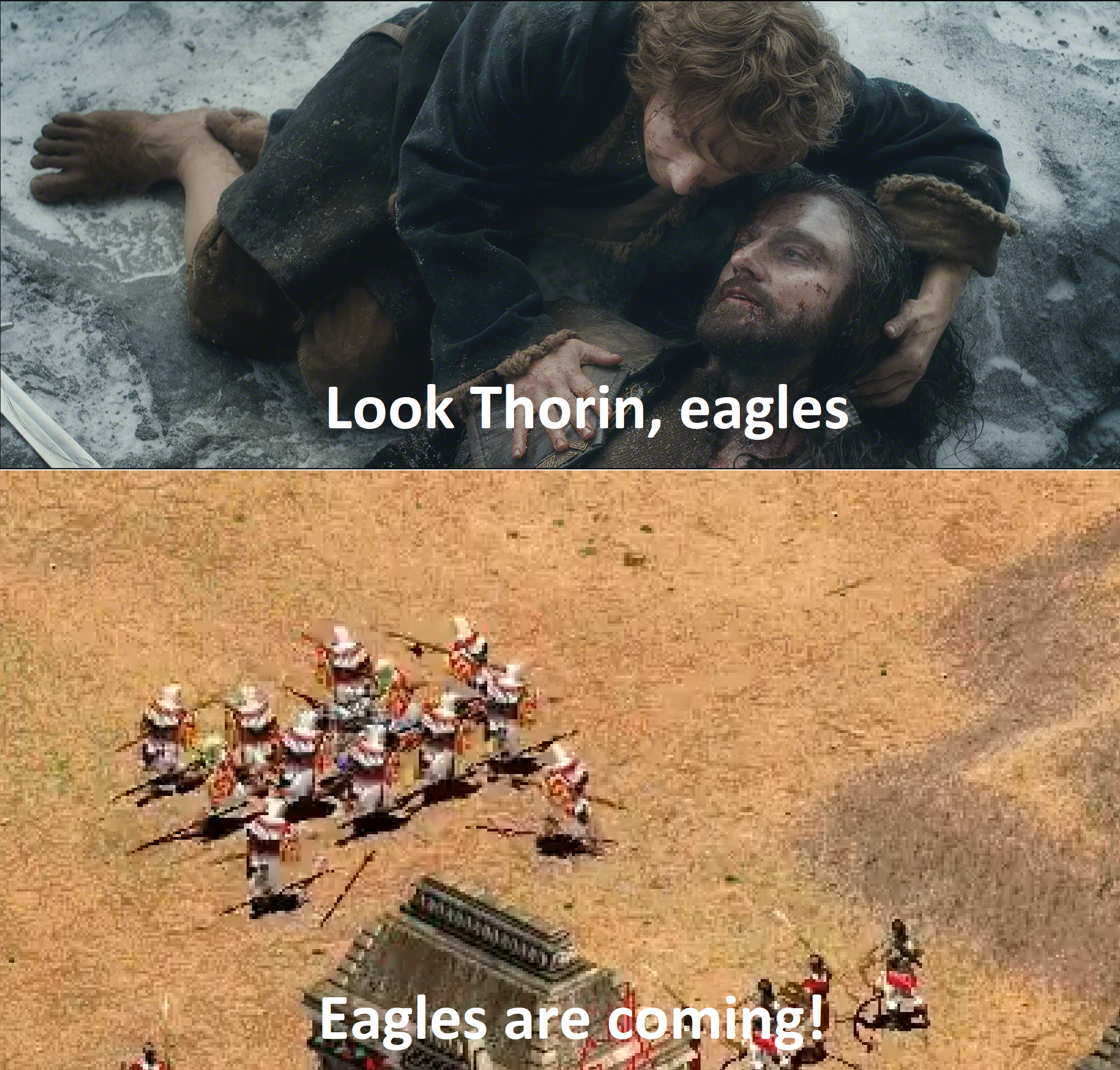 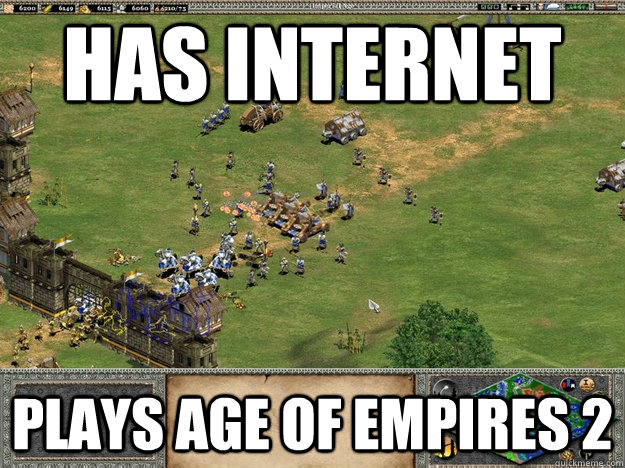 "Don't worry Bill, I finally have a military, I will send people your way" said lord John

"Guys, where do I build military uni- nevermind I found it!" Declared lady Maria.

And so the plans to attack begun to take shape.

Hordes of Winged Hussars adorned in the light blue color, stormed out to meet the purple knights, as they would group with Blue infantry men as the attack would begin.

The hordes would pay dearly for the blood shed in lord Bills lands. With the fortifications holding, the armies reached the first city of the horde alliance, and promptly laid siege to it. The red color of Lady Maria was slowly approaching, as her small group of 10 soldiers and a catapult walked to the front lines.

The battle turned into a clusterfuck -rapidly- as the horde alliance sallied forth to meet them in the middle of the town of Green. Burning buildings collapsed as arrows, trebuchet bolts flew overhead. Clash of swords, pikes and the thundering gallop of horses trampled the lands, and one by one the cities of the Hordes began to break.

"GUYS!" cried lady Maria in the midst of battle.

The other lords scrambled, alarmed

A pause. Pages were flipped, frantic investigation was made. Lord Theodore and lord John were well versed in this, Age of Empires, and yet none of them had ever encountered a single unit named Uniformed Men. As scientists tore their diplomas and universities began rioting in panic, it was lord Bills voice that calmed the masses

"Yeah! Those uniformed men on the horses, you know? The ones you have from the start?" Replied lady Maria

"BY THE GODS, YOU MEAN LIGHT CAVALRY?!" Cried Lord John, recovering from the mini heart attack he just had, as he had assumed the enemy had circled around them and was laying waste to her lands.

As the remnants of the Hordes were put to death, with the small group of units lady Maria sent neatly walking around the battlefield, destroying a barracks, while the hordes of her allies passed them by, a cry of rejoice was heard.

"Found em!" Said lord John. "They are chilling by my farms" he continued, sending a signal flare to Lady Maria.

Indeed, the uniformed men were simply admiring the architecture of lord John's farms, standing there, for what seemed to be years. And thus, ended this heroic tale of kings and queen.

As the land slowly turned silent and the screams of the dying were silenced by the peaceful transition to peace, the allies rejoiced. This would be the end of their struggles.

Or would it just be the beginning?