Starbound is a crafting 2d game, with a story set in a fantasy sci-fi universe. You will have to travel from planet to planet, collect resources and upgrade your ship. With a vast array of mods, interesting races and basic but fun gameplay. Naturally, I have been hounding my friends to start this game, since it offers co-op multiplayer as well.

With the game fully modded, my ship pimped to the brim and made into the mobile base that any space traveling man should have (none of that exploration pacifist bullshit). Waiting on my friends to join in on the fun I spent the time making sure we would have -everything- we needed. A space station, underwater base, squadron of attack jets later, one of the guys reluctantly joined in.

The campaign will have you travel around the universe, collecting data after scanning key locations of each race, followed by a dungeon. Pretty basic,but really fun.

Sentient robots dressed as medieval knights, the Glitch are an interesting race. Stating their emotions and tone before they speak, they are a peculiar race. It was to no surprise that we eventually had to scan their villages and castles in search of clues. So, me and Hyperion made our way into the dark and volcanic planets, where they usually make their settlements. After many hours spent scanning the planets, and plenty of under-lava frolicking, I managed to track down a village in one of the Red Stars.

Without further space ado, we met up, gathered our resources (bullets), prepared our scanning gear (death mechs) and set out for the village. 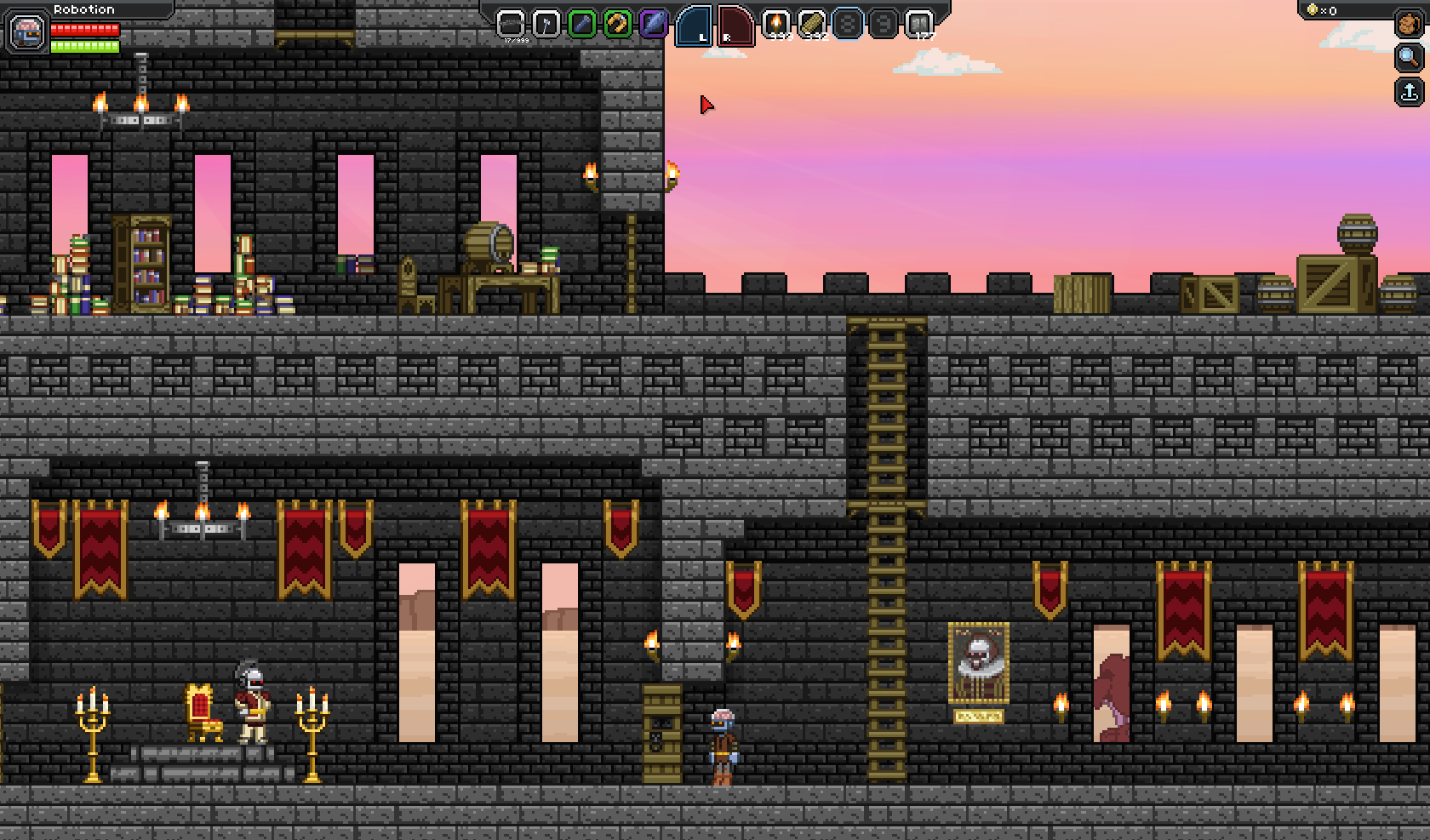 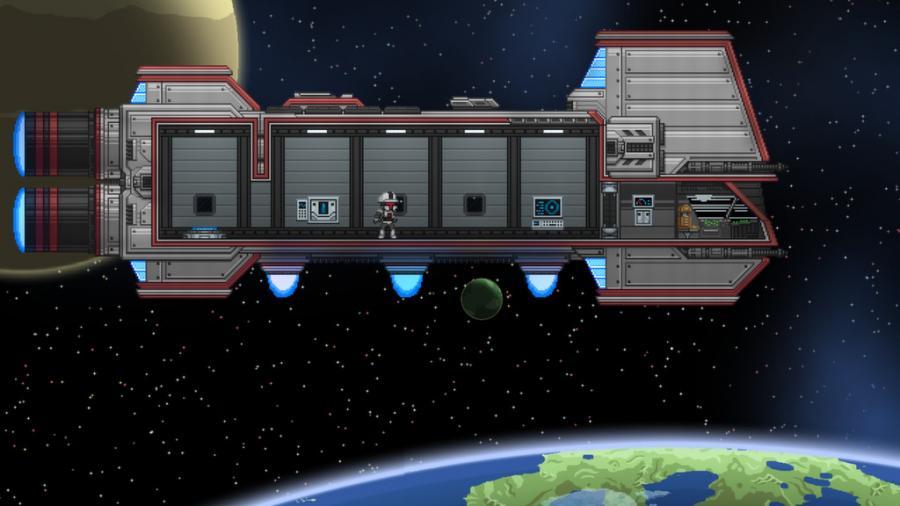 Captains Log: Space whatever the something of Universe, whatnot. You get it

You know, Volcanic planets are quite a thing. The weather can be anything from "rain of fire" to "meteor showers". Both seem equally not fun, especially the second one. To our delight, the planet we were on only had "rain of literal fire" as its only weather "hazard". Geared with equipment resistant to heat, hell I could jump into lava and be a-OK, we made it to the village.

As we started to scan the place, a few things started to uhm....grab our attention.

For some reason the Glitch inhabitants of this settlement, thought it was a good idea to create the entire thing as a direct replica of medieval houses. So we were in wooden houses with straw ceilings. We thought to ourselves

"They probably know something we don't"

We ignored this fact, and me and Hyperion continued with our scan. Three buildings into our scan, I went on the top floors of the Inn, looking for anything that could help us in our quest, when I noticed that outside, it was indeed raining liquid fire.

"Dude, its raining fire" I said to the comms, and Hyperion swiftly replied with
"And their houses are made out of wood and straw..."

At this point, we both hoped they probably had some sort of thermal insulation spray they washed the buildings with.

They did not. Naturally the roof of said inn, was made out of straw. And a fascinating thing about straw rooftops is that when they come in contact with liquid fire, they actually burst into flames. And so the Inn started to burn. Literally. I stood there, half confused, half chuckling as I declared

Hyperion came to the top floor with me, took one look at the now burning ceiling and shouted

"WHAT DID THEY EXPECT? THE ENTIRE PLACE IS MADE OUT OF WOOD AND STRAW!"

And then something odd happened. As per the laws of Starbound, when something is semi destroyed, they drop down as items, that will gravitate towards the nearest human "player" to be picked up. Naturally, me and Hyperion picked them up.

What we did not expect was that the people of said village would consider this an act of theft, and would immediately turn hostile and start a vicious, if futile, attempt to murder us. 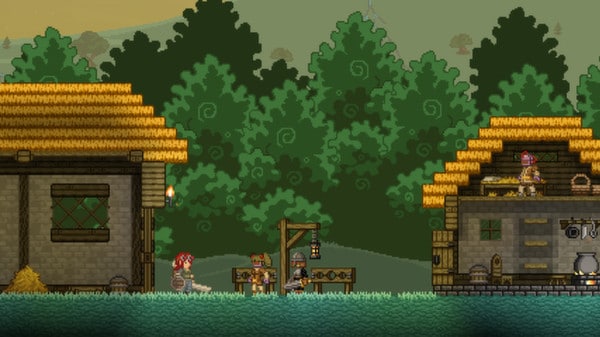 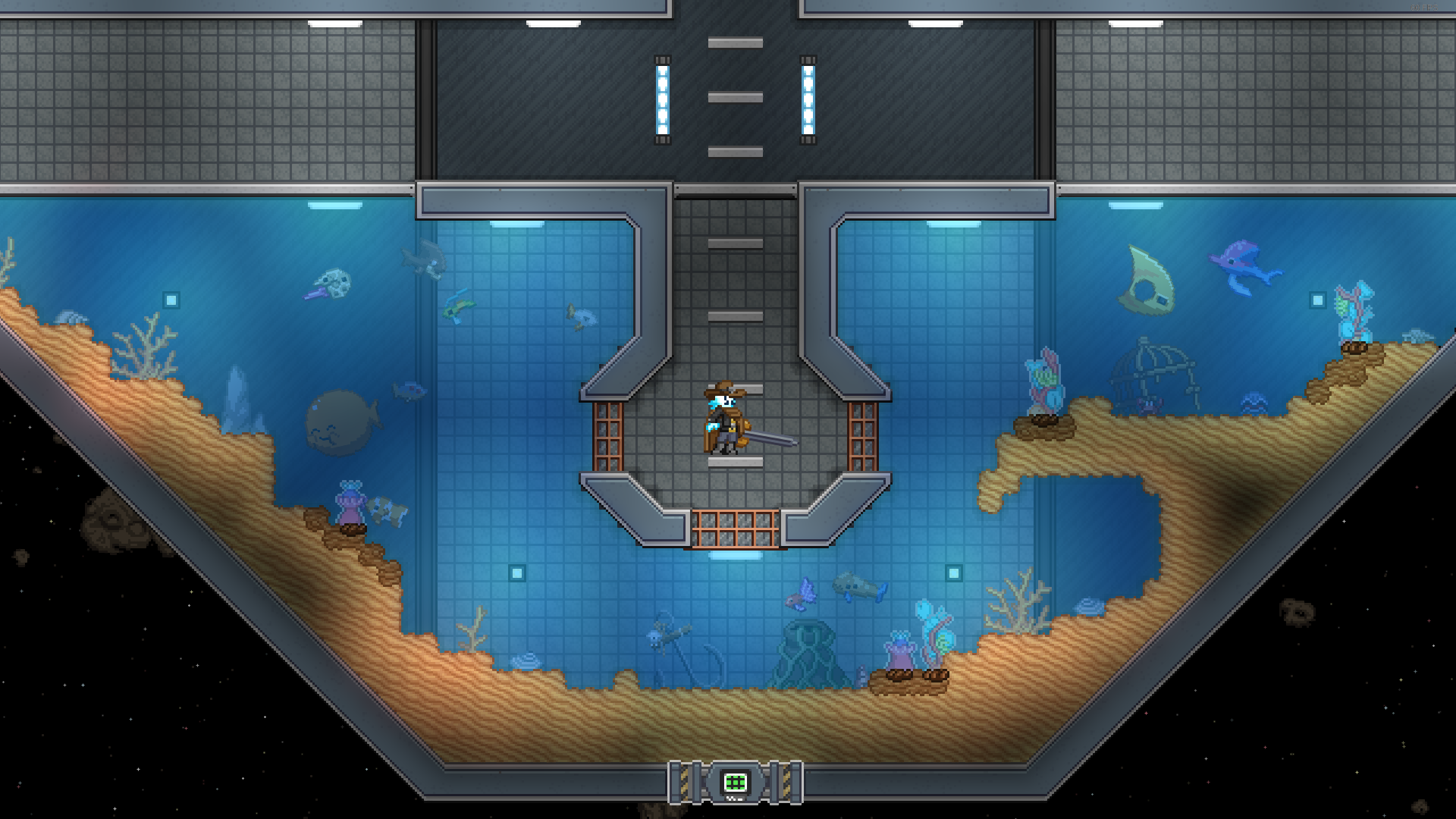 And so there we were, in the middle of a village burning due to the weather conditions, with everyone in the village turning hostile and pulling out swords and bows to kill us. How did we respond?
Well, remember all the bullets and assault rifles we packed? Yeah, they were used. Repeatedly. So me and Hyperion stood, moving from burning building to burning building, ventilating -everyone- with a hail of bullets since we were now, for some reason, branded "enemies" of said village.
Throughout the process, I could not stop laughing.
Was it because our response to bows and swords was assault rifles and shotguns?
Was it because throughout the chaos, the actual civilians would shout, and I quote

"Worried: Will I be injured by this?"

before Hyperion blasted them into tiny robo bits with his shotgun, or I shredded them with a hail of assault rifle fire? Or maybe it was because while all of the above was happening, the entire village was literally going up in flames due to a short, simple drizzle of volcanic fire-rain?

A slaughtered village in flames later, we finally did the scans we needed to do, so we promptly left the planet and never looked back. And so concludes the epic saga of "Scanning a Glitch village".

Everything that could go wrong did that day, and I swear it could not have gone better if I scripted it.

Starbound, I love you!
Till next time BloggingJar friends!