Inspired by Godzilla (obviously) this is a simple competitive game in which the players pick their own large monster and proceed to wreak havoc in Tokyo and prove to the other monsters that they are in fact, the king of Tokyo.

The game is very simple in its premise. Each player picks a monster, and you proceed to roll a number of dice each turn. Each die can either score you flat points, give you energy, give you health or indicate one punch.

The idea is, you roll the dice, with the ability to re-roll any number of them two more times, and add up the total amount of each of the above you have scored.  The first player to either score 20 points or be the last monster standing wins!

The game is simple. Each player takes turns rolling the dice with the ability to re roll any number of them to a maximum of two more times. After he is done, he collects the dice total of each symbol and does their corresponding actions as follows
Health: Restore that much health back to your monster (unless you are the king of Tokyo)
Points: You earn that much points, getting one step closer to victory
Punches: You do that much damage to the king of Tokyo, unless you -are- the king of Tokyo, in which you do that amount of damage to everyone and finally
Energy: You earn energy cubes, which you can trade for special cards that grant you special benefits 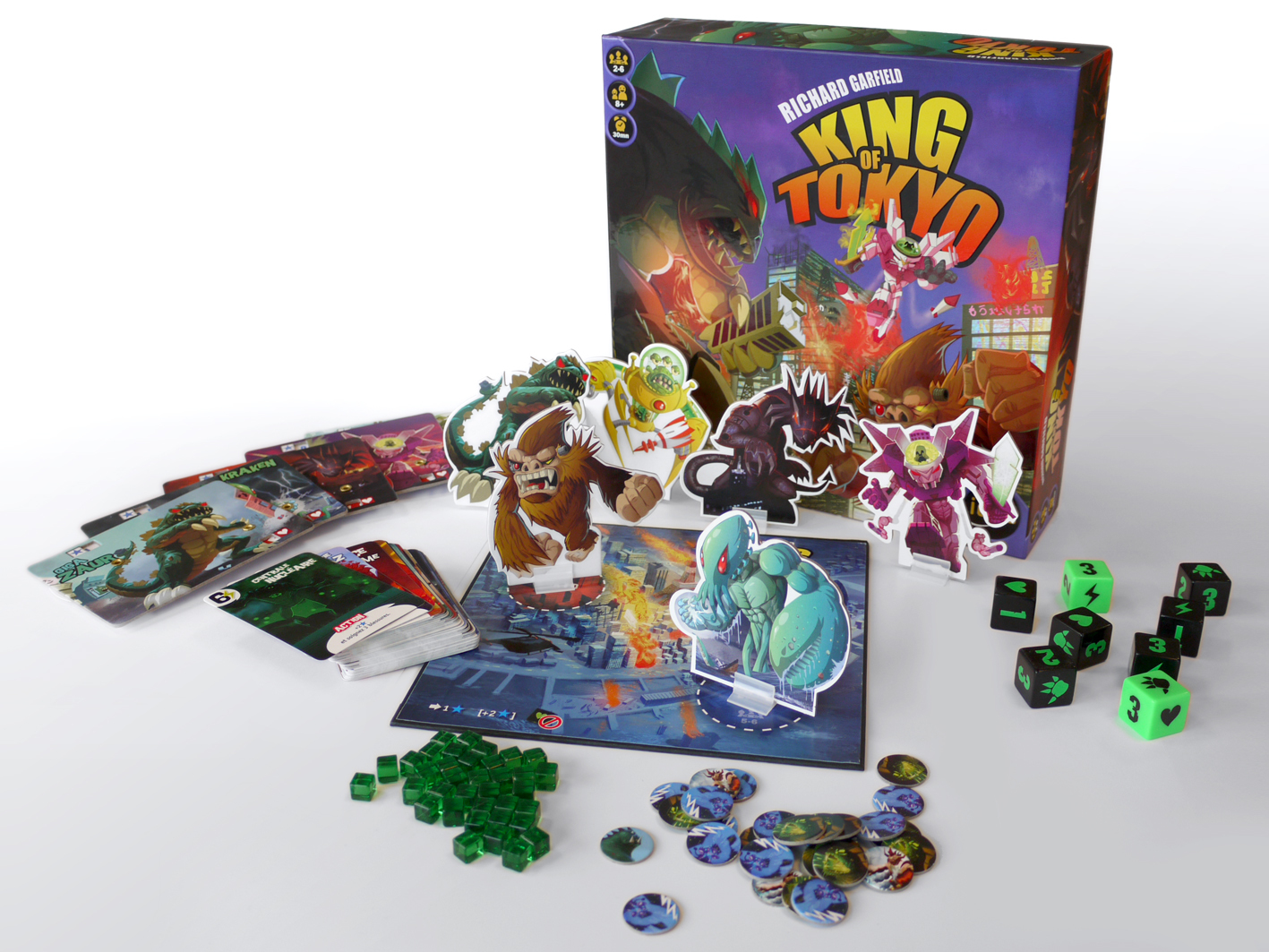 You cannot talk about board games without talking about their art. And King of Tokyo manages to capture the zany nature of Kaiju films and comic-ques nature of the premise. Vivid colors, angry looking monsters and cartoony expressions the board game has nothing to be jealous of a morning cartoon.

With a few puns and its humor highlighted by the artwork, the game is extremely pleasing and fun to the eye. 10/10 would play again material when it comes to the art style. The recent re-drawings, remakes and expansions have done well to keep the overall theme going and add their own unique spins on both monsters and areas.

Game of Tokyo is a fast, simple and tremendously fun board game for a few people. with its engaging gameplay, amazing artwork and simple rules, it is one of the best games to play with a select few games either as an "intro" to a larger more complex board game, just to "set the mood", or as a series of games to pass the time.

It's spinoff/variation King of Manhattan adds a few more elements into the game, and both of them have seen their shares of expansions. A must have game for any board game fan, its a perfect family friendly game for all ages.

P.S: Pacific Rim soundtrack playing in the background should be encouraged, but not needed

A playthrough of King of Tokyo from the fun show: Tabletop